'Trabeculectomy is the most commonly performed operation for glaucoma. Lowering of pressure inside the eye is achieved by making a small hole in the eye underneath a thin trap-door of sclera (white of the eye). 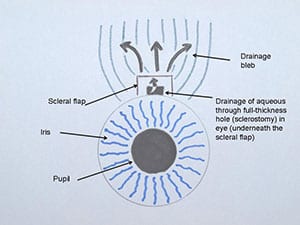 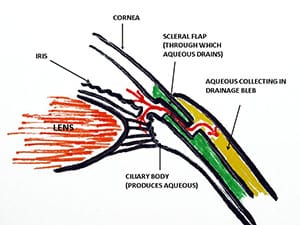 Draining the aqueous humour reduces the pressure on the optic nerve, preventing or delaying further loss of vision.

It is important to note that control of the eye pressure with a trabeculectomy operation will not restore vision already lost from glaucoma.

Long-term studies suggest that most people will achieve a low eye pressure without the need for additional glaucoma medication after trabeculectomy surgery.

In clinical trials, trabeculectomy has proven consistently more successful at lowering intraocular pressure than either medication or laser.

The success rate of trabeculectomy varies according to a number of risk factors including the type of glaucoma, previous surgery, race, age and other conditions. In low risk patients, the success rate is over 90%.

A small percentage of patients will require further surgery for uncontrolled pressure.

Uncommonly, a patient will develop a pressure that is chronically too low, requiring further surgery to elevate the pressure.

Severe complications are rare, but may happen either if the eye pressure drops very low, or very quickly during the early post-operative period, or if the eye becomes infected.

If such complication does occur, further surgical intervention may be necessary and very occasionally, permanent loss of vision can result.

I graduated from Birmingham University in 1992, and have been an Eye Specialist for almost 20 years.

Following my Ophthalmology Specialist Training, I completed two Fellowships (advanced training) in glaucoma, working with the world-renowned Professor Anthony Molteno in New Zealand and Professor Peter Shah in Birmingham. Thereafter, I undertook a Fellowship in oculoplastic/lacrimal surgery, again in Birmingham. As a result, I am dual-qualified, which allows me to perform a wide range of ophthalmic procedures.

I have been a Consultant Ophthalmic Surgeon at the North Devon Healthcare NHS Trust since 2003. In this role, I perform high volume cataract surgery and am the Clinical Lead for the Glaucoma and Oculoplastic/Lacrimal Surgery services.